Mario Balotelli and friends met a group of women at Akbars Restaurant in Manchester on Monday night (about 9pm). Mario then squeezed as many as he could into his Bentley GT and went off to Zouk Bar until about 12 midnight. After Zouk Mario took his party on to Sakura Nightclub at Deansagate Lock until 2.20am when he left with his friends, the women and some more women in a chauffer driven van that he had called to help with the numbers. The convoy headded back towards Alderley Edge…….At the backdoor of Sakura at 2.20am. 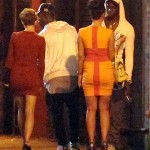